Weekly Updates on the #EndSARS Judicial Panels of Inquiry – No. 11

100 days after the brutal crackdown by security forces on peaceful #EndSARS protesters at Lekki Toll Gate and Alausa in Lagos on October 20, 2020 and brazen attempts to cover up the violence, Nigerian authorities have failed to bring to justice those suspected to be responsible for the incident.

The Nigerian Army has also pulled out of the Lagos State Judicial Panel of Inquiry as more evidence resurfaces confirming that Nigerian soldiers opened fire on peaceful protesters on that day.

The last hearing on January 23 was the third time in a row that the army and its counsel failed to appear before the Lagos State Judicial Panel. This development comes after Reddington Hospital testified to treating victims from the #EndSARS protests with bullet wounds on October 20, 21 and 22.

The Chair of the Lagos State Judicial Panel of Inquiry, Doris Okuwobi, a retired judge, warned that the army would not be able to claim denial of fair hearing when the panel submits its findings to the government. The membership of each judicial panel is largely similar from state to state. The panels are chaired by a retired High Court Judge and the members include representatives of civil society, the police, the National Human Rights Commission, and youth.

Yiaga Africa and Enough is Enough Nigeria (EiE)’s observation of the Panels of Inquiry will continue to provide information to promote transparency and accountability and build citizens’ confidence in the process.

Niger, Katsina and Rivers States have concluded the Panels with 18, 61 and 188 petitions respectively. 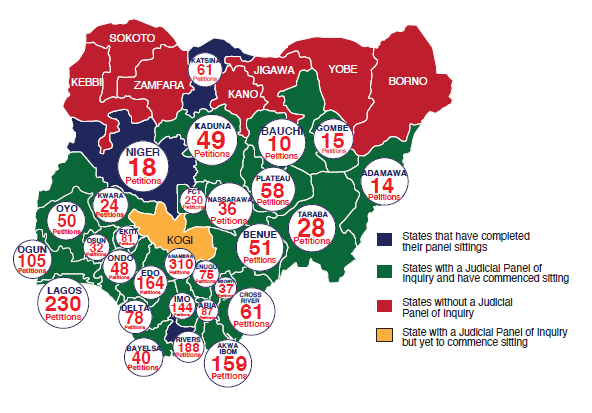 Other evidence presented across the Panels include;

The media coverage of the EndSars Movement has been positive. Even though some media houses were initially fined by the NBC, they still report the issues, with headlines that are more favorable to victims than the government.