Weekly Updates on the #EndSARS Judicial Panels of Inquiry – No. 13

The Judicial Panels of Inquiry set up across Nigeria to investigate the excesses of the Nigeria Police Force and other security agencies have continued sittings in the FCT and these 16 states in the week under review – Abia, Akwa Ibom, Bauchi, Bayelsa, Benue, Ekiti, Gombe, Imo, Kaduna, Lagos, Ogun, Ondo, Osun,Oyo, Plateau and Taraba.

In 17 states, the Judicial Panels of Inquiry have closed submission of petitions and Panels in Adamawa, Niger, Katsina, Kwara and Rivers States have concluded sittings/hearings and their recommendations are to be submitted to the government for implementation.

The ongoing Judicial Panels of Inquiry provide an opportunity for the Nigerian government at the Federal and State levels to meet major yearnings of Nigerians, which is justice for all victims and survivors of police brutality and implementation of the eventual recommendations of the Judicial Panels.

On 12 February 2021, Rinu Oduala, one of the organisers of the #EndSARS protests, resigned from the Lagos Judicial Panel on Police Brutality and Human Rights Abuse. Oduala was one of the youth representatives on the Panel. Her resignation followed a majority decision by members of the Panel on Saturday, February 6th to approve the request by the Lekki Concession Company (LCC) to repossess the Lekki Toll Gate (the scene of the alleged shooting on 20 October, 2020).

The decision to return the Toll Gate, which is a Lagos State asset received swift condemnation because it was out of the remit of the Panel and citizens believed it was premature. This led to the immediate call for a protest at the Toll Gate on Saturday, February 13th with the message that until the victims of police brutality had received justice, the Toll Gate should not be open. There was also a lawsuit filed by EiE Nigeria on behalf of a victim to compel the court to stop LCC.

On February 13th 2021, some protesters who convened at the Toll Gate were arrested in connection with the #OccupyLekkiProtest by the Lagos State Rapid Response Squad (RRS) of the Nigeria Police Force. The Nation newspaper confirmed that comedian Debo Adebayo, popularly known as Mr Macaroni, and 39 other arrested protesters were charged, but granted bail in the evening of the same day. The Toll Gate had been shut since October 2020.

Ebun-Olu Adegboruwa, SAN, representing civil society on the Lagos State Judicial Panel of Inquiry, issued a statement following the arrest, detention and dehumanization of protesters at the Lekki Toll Gate on 13th February 2021. According to the statement, ‘it becomes worrisome that the security agencies have not learnt any positive lesson from those occurrences. I commend the protesters for their peaceful conduct. I cannot in good conscience continue to sit at any Panel of Inquiry to heal wounds and end police brutality when fresh assaults are being perpetrated with impunity. Consequently, I am presently consulting with my constituency within the civil society, as to my continued participation in the EndSARS Judicial Panel.’

The Commissioner of Police, Lagos State, Hakeem Odumosu, in his response on 14th February 2021 stated he was “piqued by this unprofessional and inhuman act” adding that, “while the command is resolute in enforcing all laws in the state, it will not deviate from the Standard Operating Procedure of the Nigeria Police Force and provisions of the law in discharging its duties”, noting that the command will fish out those responsible for the molestation and ensure they are punished for their unprofessional conduct.

Similarly, on 14th February 2021, five members of the Anambra State Judicial Panel of Inquiry resigned. The members of the Panel, who are the youth representatives, accused the state government of lip service and indifference to the cause. The members are Mr Chijioke Ifediora, Mr Henry Ugwu, Mr. Osonwa Chukwuka, Mr Ebelechukwu Ngini and Mr Chibuike Obiwuzie.

Yiaga Africa and Enough is Enough Nigeria (EiE)’s observation of the Panels of Inquiry will continue to provide information to promote transparency and accountability and build citizens’ confidence in the process. 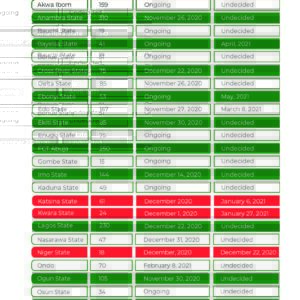