Why Did Buhari Close Nigeria’s Borders?

The President says it’s about rice. But is it?

In the middle of August, without any warning, the Nigerian government enforced a partial closure of its western border with Benin Republic under the guise of an anti-smuggling operation codenamed “Ex-Swift Response”. The operation, which was later extended to sectors of the border with Niger Republic and Chad involved a whole host of security agencies: Customs, Immigration, Police and the Army. Given the surprise nature of the move, many citizens of Nigeria and Benin were left stranded on opposite sides of the border which led to an official plea by Benin’s President Patrice Talon for the restrictions to be relaxed. In response, the Nigerian President noted that the operation was necessitated by a surge in cross-border smuggling from Benin with specific mention of rice.

The timing of the operation, as well as the reasons, appear curious as over the last year, the Muhammadu Buhari government has consistently claimed sizeable increases in rice production which had naturally defeated cross-border smuggling. So, what has changed over the last month to justify mobilizing several security agencies in a massive operation to clamp down on rice smuggling?

As always with Nigeria, the answers are rooted in economics. The Nigerian-Benin border is around 700 kilometers long and has existed in the present form since 1889 when the British and French colonists agreed to lines in the sand. Given the absence of natural boundaries like lakes or mountains coupled with fairly large cities (Lagos and Cotonou) in close proximity with a long history and strong cultural ties, the necessary conditions for trade across the Nigeria-Benin border are largely in place. Add divergent forex and economic policies across both sides of the line and you have all the sufficient conditions for significant trade linkages even with official efforts to discourage it.

Depending on whichever product is mispriced via currency or policy, trade flows between Nigeria and Benin are significant across a host of items: fuel, chicken, rice, cars and everything in between.

Let’s start with the currencies. Over the last year, the CFA franc – the currency used by Benin and the eight francophone countries in West Africa – has weakened against the USD. The CFA franc is effectively pegged to the Euro under a deal with France which guarantees full convertibility between the CFA and Euros (EUR). Effectively, what this means is that any movements by the EUR are mirrored by the CFA franc. In 2018, the US Federal Reserve hiked its interest rates four times, which increased demand for the US dollar and thus greatly strengthened it. 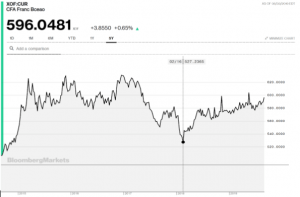 Though the Fed has since abandoned its hawkish bias for a dovish one, concerns over a global recession have continued to drive a strong demand for the US dollar which in turn has fueled a bullish run against other global currencies. As a consequence, the Eurodollar (EURUSD) has fallen from €1.16 to €1.09 to US$1. This move has been mirrored by the CFA which has weakened around 4 – 5 percent. Viewed From its high in February 2018, the CFA has lost 11-12 percent against the USD. 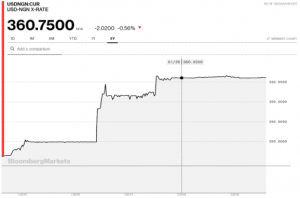 Meanwhile over in Nigeria, even with all the above-described turmoil across global currencies, the naira has remained unchanged since 2017 at the NGN360/US$1 level enforced by the Central Bank of Nigeria (CBN). Using the implied cross-rates, the development means that the Naira has strengthened against the CFA franc by around 11-12 percent. Or to put it simply, goods from the CFA franc region are now up to 12 percent cheaper relative to the naira produced goods compared with 2018 levels. And all that is before including the non-competitive nature of Nigerian goods due to the country’s high-cost environment.

Get Your Trade On

With the economics now aligned in favor of the Benin-to-Nigeria trade, more individuals have a profit motive to shift goods across the line-in-the-sand borders which will result in a pick-up in smuggling. Faced with this upsurge, it is easy to see why the Nigerian government is resorting to this high-handed tactic of closing the border. While this move will generate airplay in the coming days, left unsaid is whether any short-lived gains of imposing a border closure outweigh the economic costs of dealing with symptoms.

The naira has remained static for nearly three years and its relative strength means Nigerians have enough purchasing power to demand cheaper priced goods from across the Benin border.  This will be worsened by the inevitable price increases in Nigeria on account of the border closure (there are already reports of a sharp price increase of chicken and other goods).

Until the FG addresses this imbalance, the current blockade looks no more than another in the long series of whack-a-mole policies that Nigerian policymakers routinely apply to deal with trade problems.