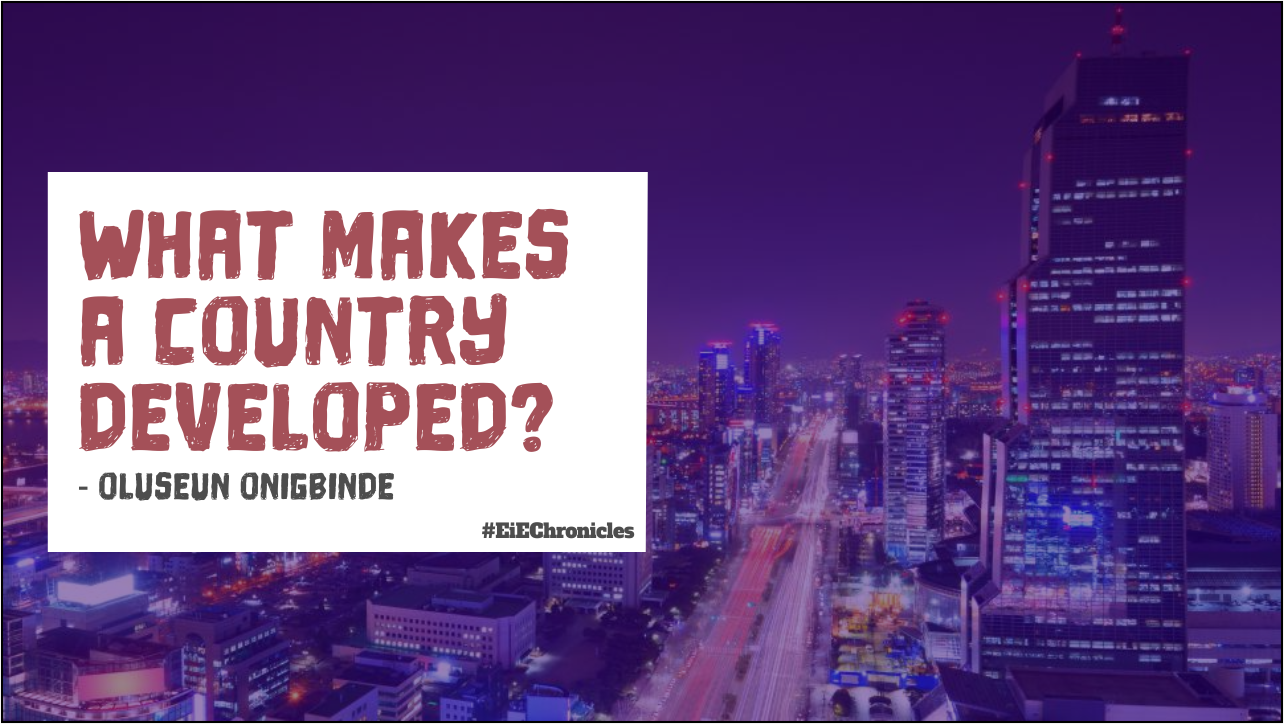 What Makes A Country Developed?

Written by Oluseun Onigbinde and was published on BusinessDay on Wednesday, January 29th, 2020

In the past one year, I have lived in the US and also hopped around 27 countries, from Guinea to Finland. These travels have left me with questions around development: what does it mean for a country to be developed? What have I seen in so-called “developed countries” that I struggle to see in Nigeria? I came up with six ideas—rule of law, infrastructure, social justice, national identification systems, robust credit mechanisms and equal opportunity—which I posted on Twitter. However, trust the intelligence that roams around that space, this was redefined into six new ideas that I gladly agree with.

Let us start with the rule of law and order. Welcome to Nigeria, where laws are only obeyed when it suits a powerful person. A Nigerian minister can choose not to obey a court hearing; he knows that nothing will happen to him. If the court mandates the release of a citizen, powerful interests, apparently superior to the rule of law will act in their own way, ignoring the court order. The UK Prime Minister Boris Johnson was recently ruled out for not being able to prorogue a parliament session and he rightly complied. Nigeria is searching for order, but order and rule of law are siblings; ignore one at the peril of the other. How can anyone think he or she is above the rule of law? What kind of society calls EFCC to settle a civil case or uses the military to intimidate a Nigerian over a disagreement? When a society is no longer governed by the rule of law, citizens use self-help to get justice. Rule of law first, administered by people with integrity, justice and also a sense of history.

Who is a Nigerian? Is it anyone with black skin within the borders of the country called Nigeria? There have been half-measures to correct our lack of a unified national identification system. We are trying to use National Identification Number (NIN), Bank Verification Number (BVN), Tax Identification Number (TIN), telcos’ data, and so on. This has led to duplication of citizens’ data in several hands. We have to do more to aggregate these data. And the first sincere step in the right direction is a census. We need to conduct a census and apply unique identification numbers to all citizens as reference numbers. It is hard to do anything in the United States as a citizen without a Social Security Number or in the UK without the National Insurance Number.

Nigeria wants to apply NIN but the National Identity Management Commission, the agency in charge, complains it lacks funding. The current approach to data gathering is too incremental for a country that continues to grow dramatically, for a country that needs the data so urgently. How do we know who is poor? How do we properly assess demography and shifting movements within the country? How up-to-date is our revenue allocation sheet? Rather than gradualism, some systems need a total teardown before a build-up, and a unique identification is one. Banking systems, telco numbers, house address, vehicle registration, passport numbers, and all services for all Nigerians should be linked to individual single reference numbers.

The absence of a functional national identity explains why Nigeria has not scaled consumer credit. It is cringeworthy to see how a Nigerian is likely to fully pay for land, a car or furniture. I believe this is one of the situations that incentivises corruption at the bureaucratic level. Nigeria needs a functional credit system to swell its middle class, expand spending wealth and reduce the idle wealth tied up in items that could have been paid for overtime. A situation where 70% of credit in a country is given to just a few individuals does not speak to a developed country. With credit scoring systems in developed countries, citizens are more mindful of their spending habits and it becomes simple to hear folks work for two years and already have 3-5% equity for home ownership.

We need to talk about infrastructure. Whenever I am in the US and I drive through those clean roads of Virginia, I feel so relieved. Yet, the US does not lead in terms of global infrastructure. Nigerian governments need to invest in infrastructure or seek partnerships that enable rapid scale. Why are our roads so bad, port systems are underfunded and the big elephant, power, still epileptic? Nigeria has to find a creative approach to raise its funding for roads that would require at least N1.5tn annually to make a dent. Landing in Murtala Muhammed International Airport or just hovering towards landing with the thickset of darkness is enough to explain that something is wrong with the infrastructure. And it makes a bad first impression for first-time visitors. My clear thinking is to empower new businesses with a guarantee to deliver infrastructure especially roads, put viable projects on public-private partnerships and toll them and seek foreign funds for infrastructure such as power and rail with current limited local expertise.

While we might be tempted to say that the large bulk of the work is in government hands but developed countries place a lot of emphasis on tax collection that’s parsed with welfare mechanisms. Tax collection is a two-way street guided by trust. Nigerian leaders have not tried to protect that trust by shying away from accountability since oil rent has fueled bogus lifestyles. Taxes are meant to redistribute opportunities in developed countries. That’s why the breakdown of most countries’ spending is mainly on either social spending, health, education, and defence. Nigeria plays the opposite with a large component of spending on infrastructure with its shallow private sector base matched by extreme poverty numbers. A well taxed state has to be underpinned by a welfare mechanism to support the poor and less privileged.

How do the poor rise up the social ladder? First, they must be alive. Second, they must have access to education. Not just any education but quality education that delivers results. Yet, the Nigerian government pays little attention to both sectors even though they are so important to national development. The Federal Government of Nigeria spends less than 12% of its entire budget on health and education. When you hear leaders of countries talk about investment in human capital, it is a fulcrum that swings around being able to provide equal opportunity for citizens’ health and education. What are the chances of primary school pupils in Idi-oro, Mushin and those in Atlantic Hall in terms of curriculum and quality teaching? Developed countries actively bridge the gap through investments and deliberate thinking. In the end, we can build the infrastructure but without quality education and healthcare—the fulcrum of human capital—Nigeria is chasing shadows with development.

Whenever I am outside Nigeria, I am always on DIY—Do It Yourself—mode. There is a chance to call Baba Hafusa to fix a car joint but what are the chances that I would pay someone $20 to do so in the US? Nigeria needs to provide decent wages for its skilled and unskilled labour. The solution to this is more about quality than wage-setting. The quality of skills and productivity has to rise with employees paying more attention to work, even as we grow an environment that rewards talent. A country that rewards productivity rather than living on a rentier system of oil will thrive. Nigeria needs to be productive and a lot will hinge on being a non-oil economy.

There is no pathway to a developed country without visionary leaders that combine all resources to deliver sound governance. Leaders with competence, courage, capacity and character are able to make the best decisions to take the country forward. Nigeria has been very unfortunate with leadership. Yet, becoming a developed society will not come out of wishful thinking. Nigeria has to look into these seven things that are critical to a functional society. A society that does not get the eighth one—visionary leadership—right cannot deliver the critical seven.

– Oluseun David Onigbinde is the co-Founder and Director of BudgIT.