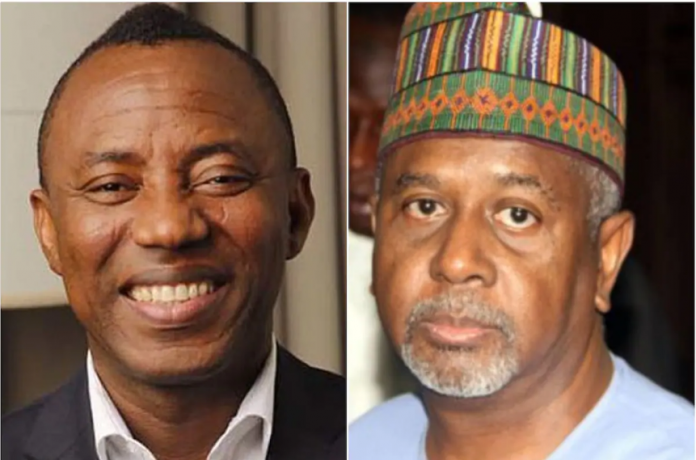 Freedom Rally Group Welcome The Release Of Sowore And Dasuki

FREEDOM RALLY GROUP WELCOME THE RELEASE OF SOWORE AND DASUKI BUT INSIST THE GOVERNMENT MUST RELEASE AGBA JALINGO, EL ZAKZAKY AND HUNDREDS OF OTHERS ILLEGALLY DETAINED OR FACE CONTINUED MASS PROTEST

The organisers of the Freedom Rally which took place on the 23rd of December 2019 at the National Human Rights Commission (NHRC) offices in Lagos and Abuja in response to the 14 days ultimatum given to the Federal Government of Nigeria welcome the release of Omoyele Sowore and Sambo Dasuki on the 24th of December 2019.

The group, however, call for the release of Agba Jalingo, El Zakzaky and hundreds of others being held illegally by the current government across the country.

The group furthermore expresses deep concerns with respect to the progressive and seemingly concerted efforts on the part of government at the federal and subnational levels towards conscripting the space for civic engagement; the relentless slide towards the rampant abuse and violation of the rights of citizens, as well as the increasingly audacious tendency towards the flagrant disobedience of court orders and the undermining of the integrity and independence of the judiciary as a separate arm of government.

These concerns were articulated under two broad issues during the press conference preceding the 23rd December rally:

That President Muhammadu Buhari to show accountability as President and Commander-in-Chief and address the nation on his commitment and that of his administration to uphold the rule of law and protect and guarantee human rights;

The release of All illegally detained persons by the SSS nationwide as revealed by Amnesty, Premium Times, and Punch Newspapers in recent months;

That the government obey all outstanding court orders;

That Government constitute an independent panel to investigate the officers who violated protocol and the circumstances that led to the invasion of the court and the re-arrest of Omoyele Sowore;

The unconditional release of Omoyele Sowore aper his bail terms.

While noting that demands (4) & (5) have been honoured, the Freedom Campaign uses this medium to demand the release of all illegal detainees and prisoners of conscience.

The group notes with disappointment, but also with a determination to continue our Freedom Campaign, that in the aftermath of the 14-day ultimatum and the Freedom Rally in Abuja and Lagos, the government, while finally bowing to the orders of the courts, only released Omoyele Sowore and Ibrahim Dasuki.

We further note and strongly condemn the organized attack by hired thugs, on the Freedom Rally in Abuja at the NHRC office and call for the investigation and prosecution of those who violently attacked persons who were peacefully exercising their civic rights.

The Freedom Campaign states for emphasis that we recognize the right to protest, but we condemn and will not tolerate a situation wherein exercising that right, one group will deliberately orchestrate and visit violent attacks on another group who are equally exercising their human rights.

We note that this violent attack which happened before the world via live media coverage took place in the presence of security officers and personnel who stood by and allowed the attack to take place. The security officers only intervened when the group called on them to do their jobs and stop the violence. We also wish to emphasise that this attack on the Abuja Freedom Rally is only the latest in an ugly trend involving the use of rented crowds to harass and attack dissenting voices.

We call on the international community to call our government to order, to stop and halt this slide towards the outsourcing of security duties to armed and unruly non-state actors.

We wish to state categorically that the release of Sowore and Dasuki, which is a victory for our struggle, is not enough until other demands are met. We will not relent in our campaign to stop the rule of tyranny in Nigeria.

We affirm our continued commitment to take all lawful, legal and constitutional steps and actions until all our demands are met in their entirety, and we achieve our goal of democratic governance that upholds respect for the rule of law and protects and guarantees the human rights, civil, political, socio-economic, and cultural rights inclusive, of all persons.