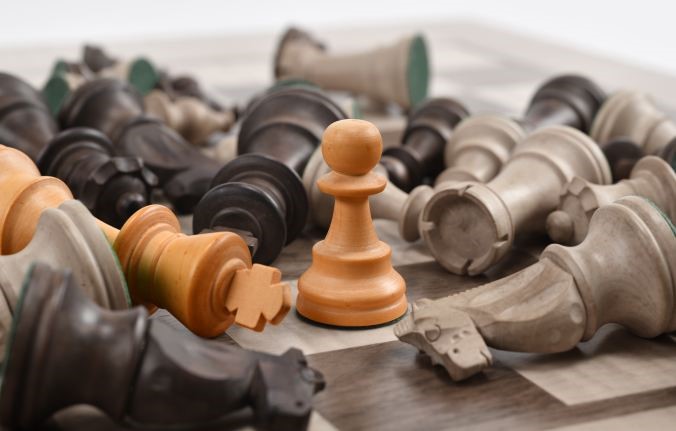 The Second Quadrannium of Gambrach: The Soldiers of Shiwajun

It was a most busy time for the Magistracy in the kingdom. The Nassholes wouldst have also been busy but they scrutinised nothing and debated nothing, as their Warden Nar-Wal had repeatedly declared, “We shall pass unseen laws by faith. And yea, shall we grant whatever King Gambrach most holy requests of us, for his thoughts towards us are for good and not for evil. Rubberstampia….?” “IN EXCELSIS!!!” responded the Nassholes.

The Nassholes were also contemplating building a wall around Social Mediana, including Digital Perusia, Twillistia and the Book of Faces. Yea, it caused the people much unchill, for the senateens most vocal about the wall were Bomi Nayshun the Erotica Pugilista and Haba Mo-rawn the enscandalled former Warden of the Border Force.

But back to the Magistracy, for it was confronted with the trial of Worh Reh of the Kalahari Newsbearers. He had been arrested by the Despotic Squad Squadron (lo, they had been rechristened), for tagging a hash of revolution against the glorious name of King Gambrach most upright. Many times, the Magistratum had ordered his release into surety but again and again the Despotic Squadron disrespectfully declined, saying “How shall we release him? What if he is swarmed by locusts from the planet of jupiter? Or kidnapped by Amazons and turned into a sex slave? Or worse, a gaddem ostrich flying in the sky takes a dump that lands on his head? We must keep him safe in our custody, for we love him!”

Finally, the Magistrate had had enough and declared, “Tell the gaddem Warden of the gaddem Despotic Squadron the if he does not release gaddem Worh Reh as I have gaddem ordered, he will have to dislodge my magistratic foot from his gaddem rectum!” Behold, Worh Reh was released pronto but the very next fricking day, in the chambers of the Magistracy, the Despotic Squadron sought again to accost the Kalari Newsbearer. And the people of Twillistia and Social Mediana couldst bear it not and there was great unchill in the land. Even Sagacious, Gambrach’s Counsellor for the Stoppage of Graft – a reKanter and frequent advocate for subsumption of the law – couldst not stomach it.

Wherefore, Gar Bar, scribe of Gambrach came unto the Social Medianites saying, “The Despotic Squadron were exercising their mandate. This is a kingdom of law and order. No one threatens a contention against the King and goes scot free!” And the people cried in response, “But Gambrach invoked the gods of Doggandbaboonia against King Gejoshaphat! Not a finger was lifted against him.” Gar Bar replied, “Tis true, but remember ye not that he only threatened dogs and baboons and not the king himself!?!? Let us speak with common sense, please!”

Fortunately for King Gambrach and his men, a bard of international renown came unto the Jirrians and got them turnt. Her name was Ekadibi and maigheeeeeurd (!) everything about her visit was lit and Jirrians were distracted momentarily. Ekadibi also went to the neighbouring Coast of Gold, where the Goldcoastian Twillistia Nobles lined up to see her as children would Saint Nicholas. Alas, she did not come unto them for she was chewing upon kebabs, provoking their fury. And thus did Jirrians win the battle of the Ekadibesian visitation.

Upon the Ekadibesian departure, news came to the Social Medianites that Lord Chickener, Warden of the Poll Tax, of whom Bakky Arie had previously queried his unGambrachian collection, had reached the end of his tenure. It was a renewable tenure, but Bakky Arie had slipped Gambrach some non-alcoholic mead in his Mystical Gourd of Nerr Potty, and thus was a new Warden for the Poll Tax appointed. His name was Muna Mee, a man of the Ananite Abacus.

Lord Chickener was one of Shiwajun’s men and so Shiwajun sent a frantic raven to Gambrach, saying, “Yo, my gee. What it do? I’m just going to keep it real with you right now, this was not the plan, yo! How you gon’do my man Chickener like that? How you gon’do *me* like that? And an Ananite? An Ananite??? When you know Icandescents are the shizznit? Fix up, bro. Fix up, stat! Forget not my Wahala Morghulis. One love.”

As he sent off the raven to Bedrock, Shiwajun assured his men he had sorted it. Lo, as day broke, news came from Bedrock to the camp of Shiwajun. “Has Gambrach fixed it?” Shiwajun asked of the emissary, who remained silent. Bandi Ruiz, who was serving as Warden of the Premium Onigbese Bank (PogBa), quickly grabbed the parchment and his face immediately fell. “My Lord, I have been replaced as Warden of PogBa with immediate effect – this letter is from the King.”

“WHAAAAAAAAAAAATTTT????!!!!” cried Shiwajun and all the nobles of South-Westeros in Jirria with him.. “Bandi Ruiz has lost to Adam Joshua? Well, my man Osinoshin is still the King’s Hand. All is not yet lost.”

But before the people could add to the unchill in the cosmos, Lady Yeeshah, wife of Gambrach, came unto them again in a fit of Ni-Banaso, protesting, “Gar Bar testeth me! He testeth me, swearraghad and I’m just letting you all know that I am vexed. I wouldst have told my husband Gambrach in the other room to deal with it but Gar Bar and his real masters Caballee and Caballum have changed the bed to a single bed! And in case, he’s never around, but that’s not the point! I can’t even have a private moment with the King anymore and so I air our dirty laundry, so you all can join your voices to mine. Worh Reh is not the only victim of Caballee and Caballum. Save me too! But let Gar Bar be warned, gaddemmitt!!!”

And in that day, the spirit of Mbaku fell upon the Wallop news gatherers, of Papyrus Mediana, and they declared, “We have watched and listened from the mountains! We have watched with disgust as our state-securital advancements have been overseen by a man-child! Who scoffs at democratic traditions! And you have handed this nation over to a King who rules and allows his agencies to administer as if there is no law. We will not have it! I said, we will not have it! And thus we proclaim, until this King reverts to his democratic face – the one he had when he realised how the Union Sovietika fell without a single canon being fired – until freedom and justice are again the beacons upon which our kingdom stands, we shall revert to the Centurion name and rank he bore as a usurper, when he first ruled as a Man of Gunn, and we shall refer to his Kingdom as a regime. Selah.”

The Wallopian Declaration, as it came to be called, was well-received across the land and the publishers of the Wallop News were hailed for calling King Gambrach to account. Not that he could hear them for he had again boarded his winged Chariot to the Land of the Pharaohs. But his griot FemCallamitus heard it loud and clear. Behold, did he respond, “Ye gaddem cocka-roaches! If ye call him a general, tis his rank and it changeth nothing. Savour ye for now the freedom ye enjoy to talk smack. Tis sweet, no?”

Lo, the people heard it and in all the land there was nary a gaddem speck of chill to be found.

-Rotimi Fawole is a lawyer and satirist.