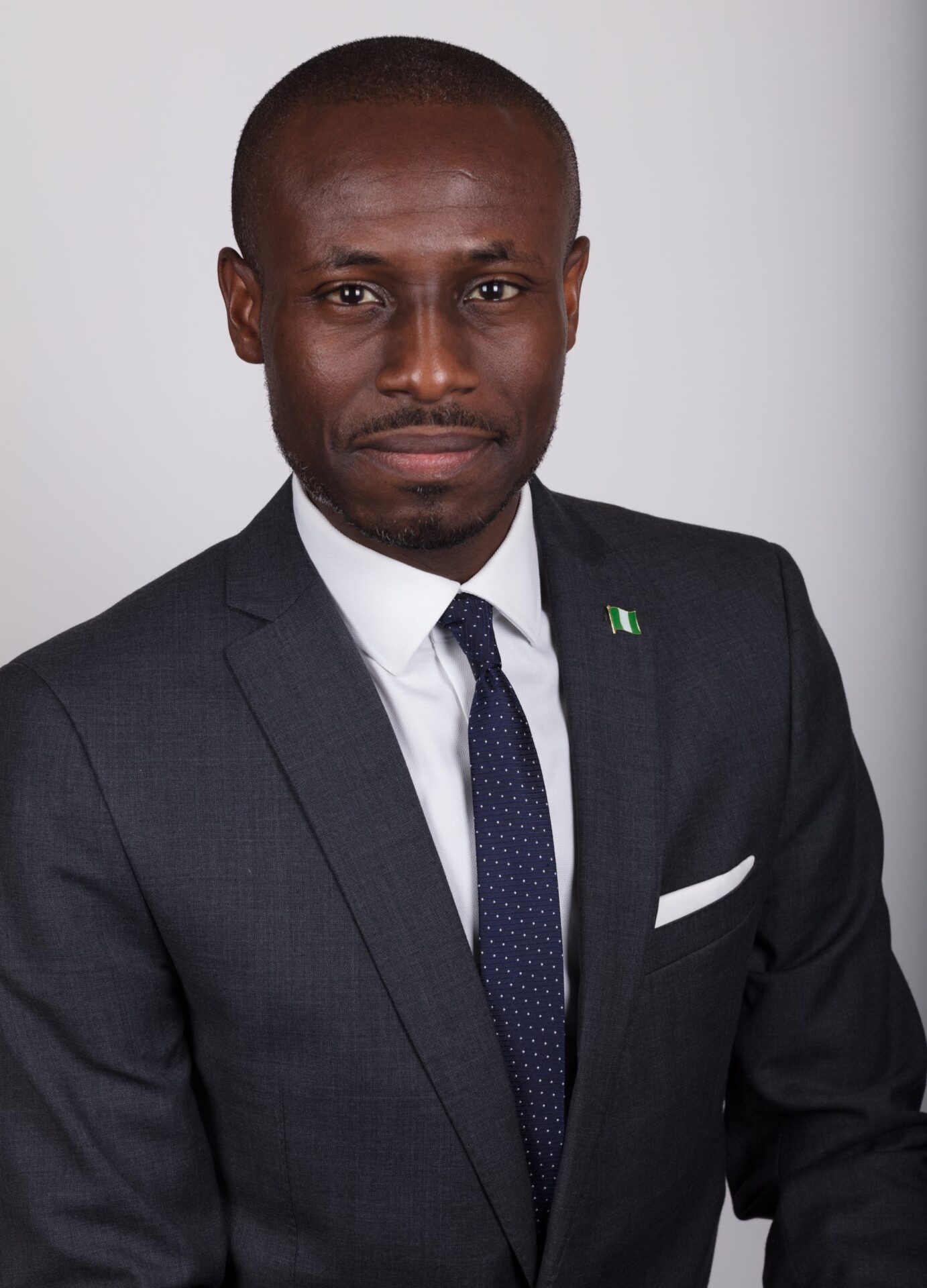 (From the blog: ‘My Nigerian Dream’)

As I considered how to begin this piece, a few thoughts raced through my mind; many of them about the approach rather than the actual message I hope to convey. Interesting huh? I don’t fancy myself as a writer in the class of the field’s well-known A-listers, but I do seem to be finding a rhythm that I quite enjoy. I find that having a fundamental driving message at one’s core is the single most important factor to being able to develop a next piece of writing. It is unto such a message that seemingly humdrum facts can latch and potentially become a collection of words that is hopefully worth reading.

“Still unconvinced?” is my question to anyone who is still sceptical about what I see as the critical role of the Nigerian Diaspora in shaping our future. It follows from my recent post titled: ‘Homeland vs. Diaspora :: Which Nigeria?’. It is becoming abundantly clear that as a catchphrase, “#EndSARS”, like many before it, is carving its place in our nation’s history and vocabulary. Some of its predecessors, in order of historical age from younger to older include “June12” (1993), “AliMustGo” (1978) and “OperationWetie” (1962). If at the times of these sad incidents in Nigeria’s past, the internet and social media were what they are today, each of these ‘tags’ would surely have been among the highly trending hashtags of their day.

Sad as it is though, I believe history will judge this current time as a watershed moment, the impact of which is not immediately apparent. However, only a non-realist would fail to see that with time, its impact will indeed be felt, perhaps and hopefully in the general population’s attitude to politics. If that does happen, I believe it would be a win, but one that only just begins to dignify the sacrifices of so many heroes who took part in the October 2020 protests, especially at the Lekki Toll Gate.

So, back to the diaspora. The UK’s Office for National Statistics (ONS) estimates with a confidence interval of +/- 22,000 that there were approximately 215,000 Nigerians in the country as at 2019. Let’s ignore the interval and stay in the middle lane. To put that number in context, park it for a moment while we understand what petitions are and how they work in the UK. The dictionary definition of a petition is ‘a formal written request, typically one signed by many people, appealing to authority in respect of a particular cause’. In the UK, any British citizen or UK resident can create a petition on the government’s website, and if they can get 5 people to support it and it meets all necessary requirements, it gets published by the government, making it available to all citizens and residents who wish to sign. At 10,000 signatures, a petition will get a formal response from the government. At 100,000 it will almost certainly be debated in Parliament.

It seems that exactly on 20.10.20, ‘a date that will live in infamy’, a petition was created by one Silas Ojo who is clearly of Nigerian origin. Like an ominous prison number, it was assigned “554150” in its web URL and was (is) titled “Implement sanctions against the Nigerian Government and officials”… 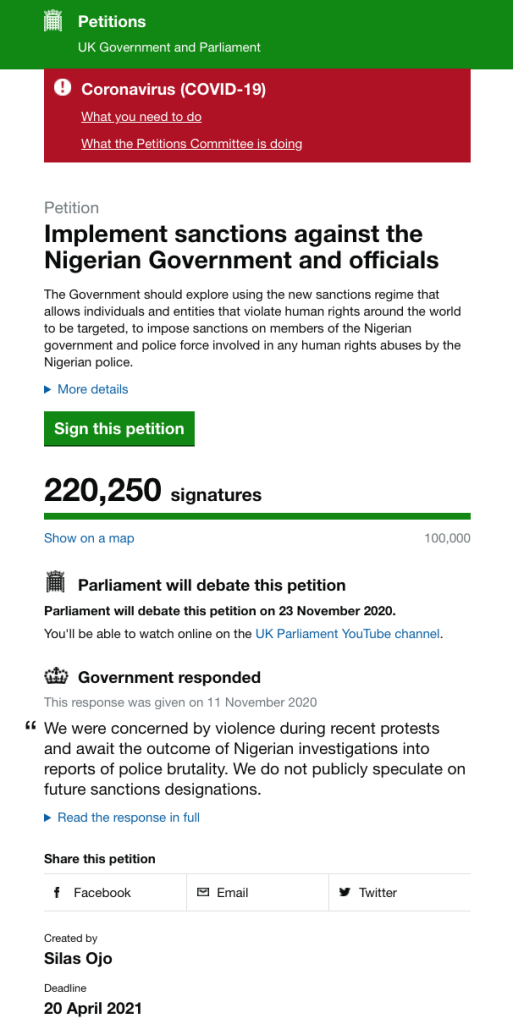 As an experiment, I thought to play with the URL petition number and went +/-1 to see the petitions either side of Silas’. The results were very instructive and highlighted that Silas had pulled off quite a feat. Let me explain.

Meanwhile, our protagonist, Silas, and his avatar, Petition 554150, galloped away speedily in cyberspace. His petition reached and passed the 10,000 mark on a date I can’t tell you. It then proceeded to conquer the 100,000 barrier and it did; finally gathering no less than 220,000+ signatures. Remember, Silas is a single individual who spoke up (#sorosoke). He kickstarted a process, and his petition became the channel through which 220,000+ other voices would also be heard through a UK Parliamentary debate – about Nigeria. The system did what it was designed to do.

Remember I asked you to ‘park’ our estimated 215,000 number (of Nigerians in the UK) so we could better contextualise it? Well, let’s retrieve and analyse that now. You’ve probably figured out my intended point. With 220,000+ signatures, Silas’ petition was signed by more people than the total number of Nigerians in the country as at 2019. This is like saying that every single Nigerian in the UK (and more) signed this petition. If you ask me, that is quite a statistic, and though I expect that not all those signatures were by Nigerians, I would assume that a large chunk were, or were directly influenced by Nigerians. Either way, the Nigerian diaspora in the UK has certainly spoken…and will be heard!

Their voices were so loud, that there does not seem to be a single constituency from St Ives in Cornwall (the southernmost tip of the UK) all the way to Orkney and Shetland in Scotland (the most northerly of the UK’s 650 constituencies) where there wasn’t at least one vote for Silas’ petition (see official map petition below). If it were an election, it would probably have been a landslide.

Map showing spread of signatories for petition ‘554150’ across the UK

As I wrap up, let’s move away from the macro data and drill down to an individual perspective. I received an email from the UK government, informing me that Parliament was going to debate the petition on 23.11.20. The email confirmed that my voice matters and that is a feeling that is crucial to true democracy. The debate emerged against the backdrop of a damning CNN report that implicates Nigerian authorities in the alleged atrocities that supposedly took place at the Lekki Toll Gate. Words like ‘alleged’ and ‘supposedly’ are not necessarily ones I would personally use to describe the incident; they sound more like the ongoing official narrative. However, thanks to impressive investigative journalism and in view of available evidence, it appears most reasonable people will conclude different.

Regarding 23.11.20, the date of the UK Parliament’s debate on the petition, one thing is clear about the influence of the Nigerian diaspora; it can cause a foreign power to take notice and potentially to act. Act how?…you may ask. Silas’ petition was clearly NOT directed at the Nigerian people but rather at individual government officials who may be complicit in or whose passive stance may have given tacit approval for the actions of SARS, the now disbanded ‘Special Anti-Robbery Squad’ of The Nigerian Police. I cannot speculate on what the UK government will or will not do, but it would be interesting to see what happens at the debate. At the very least, a light is being shone on these alarming occurrences at home, and where light appears, darkness must recede!

So what are we to take from all this? First, we now ought to be convinced beyond doubt that the Nigerian diaspora is here to stay, is relevant and has a role to play in (re-)building the nation. Second, Silas is one chap, he raised his voice and 220,000+ others followed. Where and how can you and I raise our voices against injustice and for the rule of law, especially on behalf of so many who do not even have a voice? This could be in our responses to and interventions for the poor, underprivileged, vulnerable, children, widows, unemployed, etc. Don’t limit yourself to any particular sphere of life, especially the usual family, faith and employment; expand your horizon, think deep, think wide, and you’ll surely see many areas you can impact society. Third, each person who signed the petition played a small part. By so doing, they added a single drop to what eventually became an ocean, so always play YOUR part, because (borrowing the slogan of TESCO – the UK’s largest supermarket chain), “every little helps”!

~ Ayobami Akinyode OLUNLOYO is a passionate Nigerian, political enthusiast, and an accomplished and performance-driven professional with 15+ years’ experience in business operations planning and management. He holds an MBA with Distinction from the University of Cambridge, UK and was recognised amongst the 100 Best & Brightest Executive MBAs globally in 2020.